Rome is without doubt one the most beautiful cities in the world; every year millions of tourists come from around the world to admire the treasures and masterpieces of Roman art and architecture.

But a trip to the Eternal City can be eternally confusing for first-time visitors. This guide will make it easier to uncover Rome, offering lots of practical advice that will help you discover and enjoy the city in all its glory.

1. Planning your travel in Rome

Because Rome is such a huge tourist draw, choose the date for your trip carefully. The best times of the year to visit are April, May, and late September through October. In the depths of summer, the heat and the crowds make the city nearly unbearable.

August in particular should be avoided because this is the month that the entire country of Italy seems to go on vacation. Traveling too late or too early in the year can also be risky because the opening hours for many attractions are shorter, and some are closed completely.

Airfares typically drop quite a bit when "shoulder season" begins in the early autumn, making this the optimal time to visit in my book. The days are still warm, the nights are slightly cool, and the tour groups and student mobs have mostly disappeared.

If you can plan to stay as long as a week, you won't run out of things to do and you'll still feel like you're leaving too soon. But if your time is limited, allow at least four days to see all of Rome's major attractions.

If you try to cram the entire city into a two-day span and do nothing but run from place to place furiously snapping pictures, you'll only be cheating yourself. After all, Rome wasn't built in a day and it can't be seen in one, either.

Rome's Fiumicino airport is 19 miles outside of the city. A train station is located inside and you can travel straight to Station Termini near the center of town for about $12 per person, but you'll then need to find a way to get to your hotel.

If you're carrying a lot of luggage or just want to make things easier on yourself, take a cab or have your hotel arrange to have a hired car pick you up.

Either option will cost around $50 but the no-stress factor makes it worth the extra money.

Renting your own car is always an option, but even if you're planning to tour other parts of Italy I wouldn't advise driving in or near Rome unless you have nerves of steel and the skills and reflexes of a professional racecar driver.

To plunge fully into the essence of Rome, I highly recommend staying in a hotel where you can simply walk out your door and into the heart of the city. Of course, the closer to the attractions you are the more you'll pay, but trust me, it's worth it.

Before you make a reservation, look at a map of Rome and confine yourself to hotels that are east of the Tiber River and west of Station Termini. Also be aware that distances on a map might not be as close as they appear; I once stayed at a hotel in the fashionable Via Veneto area thinking that it would be fairly close to all the major attractions, but in reality it took nearly half an hour to reach anything at all from there on foot despite the fact that it looked oh-so-close on paper.

The most vibrant area to stay in is the half-mile stretch between Piazza Navona and Piazza Barberini. Some rooms here are pricey but you'll also find plenty of small family-run hotels nearby. Guidebooks are fine for gathering ideas, but hit the Internet to get the best deals. Or if you prefer, book a hotel directly with ItalyGuides.it and you’ll contribute to publishing future guides like this one.

Going hungry is one thing no traveler should ever worry about while in Rome; the city is literally overrun with good places to eat. The busy area just south of the Spanish Steps is full of them, and the maze of intersecting side streets tucked between Via del Corso and Piazza Navona contains dozens as well.

Most have outdoor seating and offer similar menus containing pasta, pizza, veal, chicken and a few seafood dishes. The food is typically simple, fresh and delicious, and even the restaurants that seem to be tourist traps will still feed you well. If you have a tough time choosing, your best bet is to simply decide what you want to look at while you're dining and pick a restaurant based on that.

For instance, the Piazza della Rotonda contains several cafés which face the Pantheon, and Piazza Navona is completely circled by restaurants which offer views of its numerous fountains.

For the younger folks we suggest an evening sipping beer in "Piazza di Campo dei Fiori" near the Pantheon, or in picturesque Trastevere, typical hangout zone for young Romans.

A few dining tips; first, Rome is one of the cities where a restaurant's house wine is usually excellent. Second, although I recommend learning and using at least a few Italians phrases, almost every waiter I've ever encountered in Rome speaks English. I've even heard Germans and other Europeans communicating with Italian waiters in English because it's the more common language.

Some useful phrases for dining are: "Scusi, vorremmo ordinare", which means "Excuse me, we'd like to order"; or you can ask for the cheque by saying "Il conto per favore"; and if the food was good and the waiters attentive, then don't forget to leave a small tip. Remember also that, especially during summer, Roman restaurants will be open until well after ten in the evening. 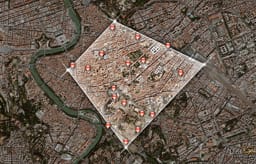 Take out that handy map of Rome again. Now draw a diamond shape with the Spanish Steps at the top, Station Termini to the right, Aventine Hill at the bottom and Piazza Navona to the left.

75-percent of your sightseeing will probably take place within this area, and even though it doesn't seem that big on the map you'll need at least two days to see everything within the diamond and three would be better; some activities, such as touring the ruins of ancient Rome (including the Colosseum) could easily occupy an entire day.

Several notable sights lie outside the diamond shape, including the Vatican (another full-day destination), Castel Sant'Angelo and the Villa Borghese. Rome's subway system can come in handy when you're traveling to these locations (look for the big red M at the entrance to each station) and a one-way ticket costs less than a dollar but there are also tourist tickets called BIT or CIS good for unlimited rides. BIT "Biglietto Turistico Integrato" is a 3-day ticket, valid until midnight of the third day on which the ticket is validated, the CIS "Carta Integrata Settimanale" is a weekly one.

Both BIT and CIS grant you unlimited rides on Atac or Cotral buses, subways, and some local trains. Tickets can be sold by tabacchi (tobacconists), which are housed in buildings with bold black T's on white or dark blue signs.

There is also a ticket called "Roma Pass" that offers you transport and two museums free of charge as well as reductions for all other museums and major events in Rome for a 3-day pass. The "Roma Pass" is available in all museums and the Tourist Information Points.

Rome is a city that is best savored slowly, like a glass of robust red wine. Allow yourself the chance to see it properly by formulating a touring plan before you arrive. Choose one small section of the city to explore each day, leaving yourself ample time to lounge over a cup of cappuccino at an outdoor café or a scoop of gelato at one of the dozens of ice cream shops you'll find.

Another hint is to save the attractions closest to your hotel for last; you may be tempted to do just the opposite, but these will be the easiest sights to visit if time starts to run short.

If the worst case scenario happens and you're unable to see everything in one trip, just toss a coin into Trevi fountain before you leave and legend has it that you'll be guaranteed another visit in the future.