You will not find any other place in the world that celebrates the ever-mutating and incredible power of water like Rome. The Trevi Fountain is a fantastic work of art that is much more than a mere sculpture.

This triumphant example of Baroque art with its soft, natural lines and fantasy creatures embodies movement as the soul of the world. The fountain is a true wonder, a jewel of water and stone that is nestled between the palaces of the historic centre of the city. 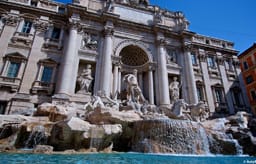 You can already hear its presence from the nearby streets. Indeed, as you get nearer the sound of its gushing waters grows constantly more intense, reaching a crescendo in the square, where you will find the most breathtaking sight.

Suddenly, the space seems to open out and you stand before a symbolic representation of this great force of nature, a tumultuous spring that seems to flow out of the ground.

The light and shade effects on the marble make the wind seem to bellow through the drapes and locks of the statues, agitating the waves, creating an extraordinarily intense and spectacular scene. In this Baroque creation, the architecture itself seems to come alive with the current of the revitalising waters.

Even the palace in the background blends perfectly with the composition and the game of space and mass gives an air of movement to the entire statue. The central feature of the monument is a chariot in the shape of a shell, drawn by seahorses with Triton as their guide. Before the enormous central niche stands Oceanus. To the side are the statues of Abundance and Salubrity. All around, natural and artificial forms merge together in a representation of rocks and petrified vegetation that run along the foundation of the palace and around the borders of the pool, which represents the sea.

This unique statue has an ancient history. Its origins go back to Roman timesand it was the terminal point of the Aqua Virgo aqueduct commissioned by Augustus, which was used to provide water for the thermal baths. The water that flows here has two names: Virgin Waters and Trevi.

The first refers to an ancient legend about a young Roman girl who showed the source of the spring to some thirsty soldiers; whereas Trevi derives from the old name for the area,which was originally called Trebium.

The aqueduct continued to function, even though it was necessary to wait until the eighteenth century when Pope Clement XII decided to restore the Trevi district and began work on the fountain we know today. It took three centuries to complete and is often attributed to Bernini, but for the most part it is the work of the Roman architect, Nicola Salvi, who took twenty years to complete it. 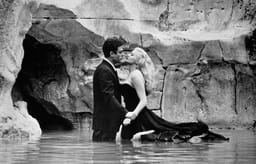 This work of art is so famous that even cinema has commemorated it on more than one occasion.

Everyone remembers the scene in the renowned Italian film, "La Dolce Vita" by Fellini; on a quiet night in an almost unreal Rome, an alluring Anita Ekberg jumps into the Trevi Fountain with her clothes on and invites Marcello Mastroianni to join her.

There is also another curious tradition regarding the Trevi Fountain. It is said that if you throw a coin over your shoulder into the water, you will be sure to return to Rome. An estimated 3,000 euros in coins are thrown into the fountain every day.

Personification of the health-giving properties of water

Personification of the health-giving properties of water

The maiden and the soldiers

The statues representing the four seasons