The Colosseum in Rome

The Flavius amphitheatre is the biggest and most imposing in the Roman world, but is also the most famous monument in Rome and is known as the "Colosseum" or "Coliseum". Started by Emperor Vespasian of the Flavia family, it was opened by his son Titus in 80 A.D.

The highly ostentatious opening ceremony, lasted one hundred days during which people saw great fights, shows and hunts involving the killing of thousands of animals (5000 according to the historian Suetonius). For the opening, the arena space was filled with water for one of the most fantastic events held in Roman times, naumachias – real sea battles reproducing great battles of the past.

But why does the whole world call it the Colosseum?

This name appeared for the first time in a famous prophecy of the medieval monk Venerable Beda: “Rome will exist as long as the Colosseum does; when the Colosseum falls so will Rome; when Rome falls so will the world”. Perhaps he got the name from the enormous statue of the Emperor Nero, “the Colossus” 35 meters high, which stood right next to the amphitheatre and has now been completely destroyed. 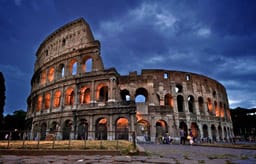 The Roman Colosseum is one of the most imposing ancient structures. Imagine it all white, completely covered in splendid travertine stone slabs. It is elliptic in shape in order to hold more spectators. It had four floors; the first three had eighty arches each; the arches on the second and third floors were decorated with huge statues.

It's incredible to think that this imposing building took less than ten years to build. How did they do it?

The Romans were really good at an architectural technique that they knew well: the arch. An arch allows you to distribute the weight of heavy constructions effectively, in a perfect manner. The Romans used arches as the main element of their architecture, think of Roman aqueducts, for example.

The Coliseum can be viewed as though it were a series of aqueducts built one on top of the other.

What we see nowadays is just the skeleton of what was the greatest arena in the ancient world. Three-fifths of the outer surrounding brick wall are missing. In the Middle Ages, when no longer in use, the roman Colosseum was transformed into an enormous marble, lead and iron quarry used by Popes to build Barberini Palace, Piazza Venezia and even St. Peter's. 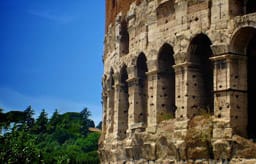 The holes still seen in many columns are just the holes made to extract the lead and iron used by the Romans for the nails inside the marble blocks.

The amphitheatre could hold up to seventy thousand spectators. The tiers of seats were inclined in such a way as to enable people to get a perfect view from wherever they sat.

Entry was free for all Roman citizens, but places were divided according to social status, similar to seating divisions in today’s theatres; the seats at the top were for the common people, but with distinct sections for men and women, the nearer you got to the arena the higher your social status; in the front row were senators, vestals, priests and - naturally - the emperor.

Like modern sports stadiums, the Roman Colosseum gave spectators efficient protection from the sun thanks to its ingenious roof covering, the “Velarium”. The Velarium was an enormous linen tarpaulin hung by a system of ropes, winches and wooden poles that girded the top of the outer wall. It took one hundred sailors from the Imperial fleet to move it. They moved in perfect synchrony to the beating of a drum.

The roman Colosseum and the Gladiators

On entering, we see the arena straight ahead of us. The stage for shows, whose floor was once made from a mixture of brick and wood, has now disappeared altogether. In its place you can see the cellars which housed equipment used to prepare and carry out the games.

The two underground floors housed the lifts and hoists with their counter weights, of which we can still see the rails today; they were the special effects of the time, used to hoist up animals and gladiators who burst into the arena through trapdoors, suddenly appearing in a burst of white dust giving the audience great surprise effects.

A complex system of hinges and lifts also allowed them to hoist up set-designed backdrops, used for the hunting events.

The shows taking place in the Colosseum were both of a symbolic and solid nature and created a link between citizens and their leader through common participation at important public events with the not unimportant function of giving the people some fun to distract them from political problems.

So, what exactly happened inside the Colosseum in Rome?

Lots of different shows were put on in the amphitheatre, at different times, following a specific time schedule: in the morning the "Venationes" - fights between exotic animals, or between men and animals.

At times, as a form of public execution, people were left to the mercy of ferocious beasts. The "Silvae" must have been quite spectacular; special scenery was reconstructed in the arena by painters and set-designers, with trees and bushes, so that it looked like a forest full of animals, which in this case did not necessarily have to be killed.

But also less cruel and definitely more unique events took place like the famous exhibition of an elephant who knew how to write words in the sand with its trunk. It is not true that the Colosseum was used to kill Christians as a kind of spectacle.

The event the audience enjoyed most was definitely the gladiators. Towards midday there was a break during which they removed the bodies and spread more sand on the arena floor.

A deafening noise arose from the audience; to the blaring of trumpets and the beating of drums, the gladiators triumphantly paraded into the packed arena.

They came from an underground passageway linked directly to the Gladiators’ barracks, the Ludus Magnus and were welcomed by fans like real heroes, a bit like today’s sports champions. After a brief walk around the arena, the gladiators paid homage to the Emperor’s stage saluting with the famous words "Ave Cesare morituri te salutant" (Hail Caesar, those who are about to die salute you).

But who were the gladiators?

The term gladiator comes from Gladius, the short sword used by legionaries. Rarely were they people who had to fight against their will. Normally, gladiators were prisoners of war who were given the choice to be slaves or to fight in the arena for a limited period of time at the end of which they would be free, often after having put aside a discrete sum of money.

Others were simply paupers in search of fame and riches. Along with a good pay, the profession gave them great popularity, especially with the women, who even paid out large sums of money just to spend a night of passion with one of them.

There were twelve types of gladiators; there was the “Retiarius” armed with a net, a trident and a knife; or those who fought with a shield and a sickle, others wore a crested helmet, strong armour and carried a javelin. The duellers were chosen from different categories for dramatic effect. 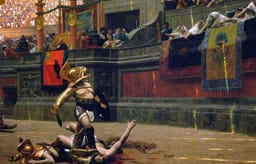 If the defeated gladiator was wounded, he could ask for pardon by raising an arm; then the audience would shout to the emperor present on his stage to save him or put him to death; the emperor decided the poor man’s fate: thumbs up saved him, thumbs down put the gladiator to death.

The winners received golden palm leaves and large amounts of money. After each battle, servants dressed like Charon, the Ferryman of the Underworld, made sure that the wounded were really dead and where necessary finished them off. The gladiator’s blood was much in demand; people thought it had healing powers and could heal you from epilepsy and give you greater sexual vigour.

Roman spectators loved cruel shows, those that we consider violent to say the least. Their passion for these events can be compared to what some people nowadays feel for the so-called “splatter” cinema. With one basic difference: the crudeness of reality. Just think that during mass battles and in the hunts, the smell of blood and burnt flesh and that of wild animals became unbearable and the effort to mask it with incense and perfumes had no effect whatsoever.

After the VI century, with the Empire's decline, the Colosseum fell into disuse and its walls housed confraternities, hospitals, hermits and even a cemetery. From the Middle Ages onwards, the Colosseum has been one of Rome's and the world's greatest marvels, attracting hoards of visitors.

Threatened with demolition by Sixtus V for town-planning reasons, it was declared a sacred monument dedicated to the Passion of Christ by Benedict XIV, placing a cross on a pedestal, as a symbol of the sufferings of all Christian martyrs. This cross is still the starting point for the Stations of the Cross on Good Friday.

Since then, it has become an object of worship for Christians and was protected from further destruction and ruin; in fact, Popes after that restored and consolidated it.

For a tourist today, seeing the Colosseum means, as Charles Dickens wrote, "seeing the ghost of old Rome floating over the places its people walk in".

The Colosseum from via dei Fori Imperiali

The Colosseum: view from the Palatine

The Colosseum
Located in: Rome, Italy