Map of Rome: Top things to do & top attractions in Rome

Rome is a beautiful city full of history and culture. Around every corner you'll come across architectural and art treasures. There is so much to see and do it's sometimes hard to know where to start, and how to get the most out of your trip.

To help you out, this guide points you in the direction of the top 20 things to do and see in the city.

Spend a few minutes planning your time in this eternal city to get the most out of its attractions. Don't forget to leave yourself some time for relaxing over a cup of coffee and enjoying al-fresco dining on the flavors of Italy. 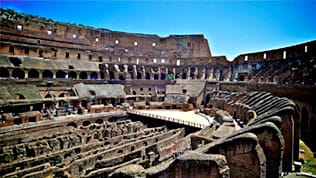 The Colosseum must be one of the city's most thrilling sights. As you stare in awe at it, try and imagine it clad in Travertine stone and marble and supporting a huge canvas awning designed to keep the sun off 50,000 spectators.

In its cavernous underground world, gladiators lived and trained and wild animals were caged ready to be raised up to the crowds in pulley-operated lifts.

Its inaugural games were in 80 AD, when 50,000 animals were slaughtered over 100 days. Abandoned in the 5th century, it was later used as a fortress and its precious Travertine stone and marble stripped to decorate many of Rome's palaces. 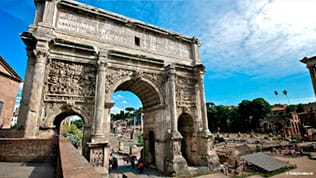 Leave yourself at least a couple of hours to explore the sprawl of ruins that cover the site of the Roman Forum. Building started on the site of an Etruscan burial ground in the 7th century BC, becoming the magnificent central showpiece of the ancient city.

The area was home to temples, public spaces, baths and basilicas and with the help of informative maps and information boards you can still make out the outlines of important buildings and streets, such as the Via Sacra, the Forum's main road and the spot where Julius Caesar was cremated, the Tempio del Divo Giulio.

St. Peter's Basilica is at the heart of the Vatican City, and is the most spectacular and richest of Italy's churches. St. Peter's is full of beautiful works of art, including La Pietà, Michelangelo's evocative sculpture of Mary and Jesus.

The church took 120 years to construct, eventually being consecrated in 1626. Be prepared to queue to get in and follow the strict dress code of this Catholic place of worship. No mini-dresses, shorts or bare shoulders are allowed in.

4. Vatican Museums and the Sistine Chapel

Also in the Vatican City are a collection of museums containing some of the world's greatest art works. On show are Etruscan bronzes and Egyptian mummies, frescoes by Raphael and works by Caravaggio and Leonardo da Vinci.

Part of the museum complex contains the Sistine Chapel, or Capella Sistina, where one of the world's most iconic ceilings can be viewed. It is well worth being patient to get a glimpse of this fresco which took took Michelangelo four years to complete, working from a scaffold in a cramped and narrow space.

The eternal city is full of imposing and playful statues, but the Trevi Fountain is probably one of the most iconic. This fountain is known around the world for Anita Ekberg's dip in the film, La Dolce Vita.

Recently restored, this water feature is an over-the-top collection of baroque mythical figures and wild horses. Tradition states that throwing a coin into the fountain will ensure your return to the city. As an average of 3,000 € a day is tossed into its waters, it is apparent many people hope this is true.

This is one of the oldest and most influential buildings in the Western world, having stood for over 2,000 years. Its magnificent bronze, gilded and painted interior belies the rather drab and pock-marked exterior it shows to the world.

The Pantheon has the largest un-reinforced concrete dome ever built in the world. The Pantheon's massive dimensions are perfectly symmetrical, while its most fascinating feature is a central hole, of nearly 9 meters, in the dome.

Symbolically this connects the temple to the gods, but in reality spreads the load of the concrete roof. The interior marble floor is sloped to allow rainwater to drain away without causing damage.

This ornate square was for many centuries the site of the city's main market. It is still a popular place for street artists and hawkers to entertain tourists while they relax at a street cafe.

The Piazza is surrounded by old baroque palaces and dominated by Bernini's Fountain of the Four Rivers - the rivers Nile, Ganges, Danube and Plate.

This outstanding gallery contains one of the best private art collections in the world, with stunning works by Raphael, Titian, Bernini and Caravaggio.

The collection was put together in the late 16th century by one of the most ruthless art collectors of all times, Cardinal Scipione Borghese.

If you only have time to visit one gallery in the city, then it should be this one. Tickets need to be pre-booked and you will be given a two-hour slot.

Nearly every visitor has their photo taken on the Spanish Steps. Built in 1727, they wind their way up from the Piazza di Spagna to the French church, Chiesa della Trinita dei Monti.

At the foot of the steps is an intriguing fountain, the Barcaccia, also known as the 'sinking boat' fountain.

Taking a seat on the Spanish Steps for a while is a great way to rest your legs and people-watch. 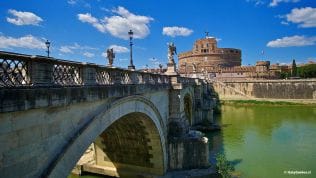 This grim and imposing circular palace near the Vatican was built as a mausoleum for Emperor Hadrian.

Over the centuries it has also been a prison, a papal residence and a place of refuge for popes in times of trouble, being linked to the Vatican City by an underground passage.

Visit its museum and then have a coffee on the ramparts, a great way to view the city.

The Capital area is home to the world's oldest public museums and contains some of the finest collection of classical sculpture in Italy.

The entrance to the museum complex is through the Palazzo dei Conservatori, where you'll find a courtyard littered with a huge head, hand and foot.

These are the remains of a 12 meter high statue of Constantine that originally stood in the Roman Forum. 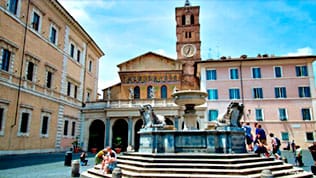 The narrow alleys of Trastevere contain some of the most photographed washing in the world, because despite its popularity with the tourists, the area is still very much residential.

At its heart is the lovely Piazza Santa Maria de Trastevere, where locals and tourists mingle day and night.

This square is in the Parione district and used to be a site for races and executions. Today it is home to a busy street market during the day and a popular center of nightlife for youngsters once the sun goes down.

Surrounded by the palaces of medieval nobility, it has always been a place to see and be seen.

Although there isn't much to see above ground today, the Circus Maximus, where chariot races were regularly held, was enormous, and the largest stadium in the ancient world.

At the height of its glory it was able to seat 250,000 people, a quarter of the ancient city's population.

The original track is still visible in the grassed area today.

The Mouth of Truth is a large marble face mask, probably a depiction of the sea god Oceanus, with his eyes, nostrils and mouth open.

It can be found against the wall of the Santa Maria in Cosmedin Church, in the Piazza della Bocca della Verita.

No-one knows the original purpose of this piece of stone but legends have grown up around it. If you are brave enough to put your hand in its mouth, be sure that you don't tell lies, or it will snap shut on your wrist.

16. Piazza Knights of Malta and Keyhole

This attraction, located on the Avertine Hill, is a little off the beaten track. Look for the sealed door leading to the gardens of the Knights of Malta.

A quirk of fate, or a clever architectural trick, means that if you put your eye to its keyhole you will see the extraordinary site of St. Peter's dome.

We're coming to the end of our trip around the eternal city and this tranquil Garden of Oranges is the perfect setting to relax for a while, maybe enjoy a picnic or take in one of the shows at its outdoor theater.

Saint Dominic named the garden, presenting the monastery here with its first orange tree. Legend says that Saint Catherine of Siena picked its oranges, which she candied and presented to Pope Urban VI.

Tiber Island is a place of mystery and shrouded in legend. It is linked to the banks of the river by the first stone bridge built in the city, the Ponto Rotto, or broken bridge.

Shaped like an ancient Roman warship, the island held a small fort in the middle ages and has always had links with healing.

Its spring is said to hold health-giving water, which was thought to have been effective during medieval plagues.

The Baths of Caracalla sit near the Appian Way and were built by prisoners and slaves on the orders of Emperor Caracalla.

The complex was huge, and its imposing ruins are still visible today. These, along with a fascinating museum, provide us with a glimpse into an ancient world. Originally clad with marble, and covered in bright frescoes and mosaics, these baths would have been used by up to 6,000 Roman citizens a day.

It is worth seeing them floodlit at night, or trying to get tickets to one of the operas regularly held in their grounds during the summer months.

The Piazza del Popolo sits to the north of the city, where three famous streets meet - Via del Corso, Via del Babuino and Via di Ripetta. These streets are home to many high-class shops and boutiques.

This enormous square opens out from the gate through the Aurelian Walls, and was the first sight visitors had of the city when arriving from the north. The Piazza has been remodeled many times over the centuries and is now connected to a park on the Pincio Hill above it by a curving flight of stairs.

The design of this flight gives the appearance of trees and plants cascading down into the square below. The Piazza del Popolo contains an Egyptian obelisk and is surrounded by three churches dedicated to the Virgin.