In Dan Brown's book, "Angels & Demons" and Ron Howard's movie, we follow Robert Langdon as he discovers clues along the Path of Illumination.

Langdon is called to Rome when an eminent physicist is murdered and branded with an mysterious emblem on his chest. An expert in religious icons and symbols, Langdon reveals that it is a sign that the Illuminati, have returned to destroy the Catholic Church.

With an anti-matter bomb set to cause a cataclysmic explosion beneath the Vatican and the kidnapping of four cardinals, it's a race against time. With the help of Vittoria Vetra, the daughter of the murdered physicist, Langdon races through the streets of Rome unlocking the secrets he finds in the Diagramma by Galileo.

The mystery is based around the four elements, earth, air, fire, and water in sculptures by Bernini. 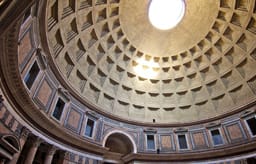 As Vittoria and Robert decipher the clues they start in the historic center of Rome at the Pantheon on the Piazza della Rotonda.

With its large concrete domed ceiling, which isn't reinforced, the Pantneon is one of the oldest buildings in Rome. A feat of engineering using cement and pumice rock for lightness, it was originally a place to worship the Roman Gods.

Now it is part of the vast collection of Catholic churches and is the tomb of the painter Raffaello Sanzio.

In the film, Vittoria sees a sign indicating that the body was placed there in the 17th century. This occurred after the time the secret code was written in Galileo's book, they were in the wrong place. 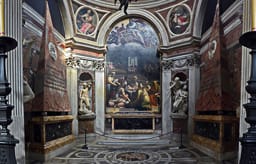 Inside the Chigi Chapel in the Church of Santa Maria del Popolo, Vittoria and Robert find their first clue and the first dead cardinal.

Representing the first element of earth, the cardinal was buried to the waist and dirt shoved in his mouth.

Paintings of Raffaello Sanzio (Rafael) fill the ceiling and walls of the Chigi Chapel and this is considered the best remaining original examples of his work.

The Bernini sculptures of Habbakuk and the Angel point Robert and Vittoria to the next destination on the Path of Illumination.

St. Peter and the 'West Ponente'

St. Peter's square and the Basilica are the next stop for the two sleuths.

The next element is air, and this becomes apparent when they find the body of the second cardinal.

The cardinal has his lungs punctured and his body seared with ambigram of the word air.

The stone relief embedded in St. Peter's Square shows West Ponente, the west wind, in the form of an angel blowing away from the Vatican, their latest secret sign. 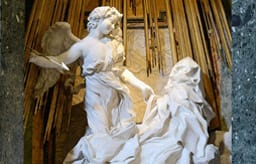 The next element of fire takes place at the Church of Santa Maria della Vittoria where the Bernini sculpture of The Ecstasy of Saint Theresa can be found.

Sculpted in marble and representing a vision St. Theresa wrote about in her autobiography. An angel with a golden arrow repeatedly stabbing her in the heart leading her to a point of ecstasy. The two appear to be floating on a cloud as St. Theresa dies from the wounds. 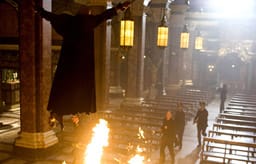 Bernini captured the essence of this vision as the folds of her gown seem to be melting away as her soul is returned to God.

In the film, when Robert and Vittoria arrive, they find the third cardinal suspended from the ceiling on cables meant for lanterns. The cardinal is on fire and the pews beneath burning. They have arrived too late to save him from the torturous death at the hands of the Illuminati.

With the discovery of the fourth cardinal, the book and the movie differ.

The location is the same, at the Piazza Navona but in the book the cardinal dies, in the film Tom Hank's character saves the cardinal who had been wrapped in chains and thrown into the Fountain of the Four Rivers to drown, this representing the element of water.

The fountain was sculpted by Bernini to represent the wide reach of the Papal influence across 4 continents. The 4 rivers representing the Ganges, the Nile, the Danube and the Rio de la Plata for the American continent.

The dove at the top of the obelisk in the center of the fountain points to the last location and the rescued cardinal tells Robert where they had been imprisoned. 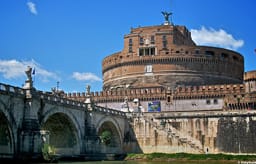 By connecting all the places the kidnapped cardinals were found, this forms a cross.

The center of which is the Castel St. Angelo, and it's where Vittoria was being held captive and had also been the secret meeting place for the Illuminati.

As Robert fights with the assassin, Vittoria frees herself and saves Robert and the day, by sending the assassin over the balcony plunging to his death. The two of them run down the Passetto del Borgo to the Vatican.

The castle used to house the ashes of Hadrian and those who ruled after him. His ashes were lost after raids, and once taken over by the Catholic Church, it was used as a residence, a fortress and also a prison.

To experience Rome at its best opt to go from April-June or late September through October. These months you'll still have pleasant weather but the crowds are far less. Off peak times also benefit from lower room rates as the demand is lower.

Why not unlock the mystery for yourself by following the secret route on the Angels & Demons sights in Rome? See you in the eternal city.