William Shakespeare's Romeo and Juliet, first published in 1597, is considered to be the first romantic tragedy ever written. It isn't, however, a tragedy on the scale of Othello, Hamlet or King Lear but more a tragic series of misunderstandings. These are caused by the ongoing quarrel between the Montague and Capulet families (who really did exist!).

Romeo and Juliet meet for the first time when he attends a ball at her father's house. The attraction between the two youngsters is immediate but they know it's doomed because of the hatred between their two families.

After the ball, the infatuated Romeo returns to the Capulet garden and overhears Juliet on her balcony declaring her love for him. Romeo makes himself known and they vow to marry the very next day, a marriage doomed to instant tragedy.

With the writing of Romeo and Juliet, Shakespeare began the era of modern drama, an era where the lives of ordinary people became just as important as the lives of the great. This isn't the story of kings or queens, generals or emperors but just two young teenagers caught up in events beyond their control.

So vivid are Shakespeare's settings for Romeo and Juliet and so descriptive the famous balcony scene where the star-struck young couple declared their love that people forget they aren't historical characters.

So intertwined have they become with Verona that those seeking love make pilgrimages to Juliet's house from all over the world.

So how did a 13th-century house in Verona become linked with Romeo and Juliet for evermore?

The clue is in the name. The house belonged to the Dal Capello family, commonly known as the Cappelletti. This was so similar to the name of Juliet's family, the Capulets that the house became her family home in everyone's imagination and in the process gave a great boost to Verona's tourist industry. 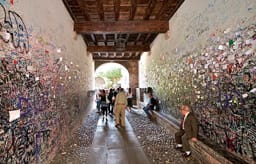 The link was given extra weight by the convenient fact that there's a small balcony overlooking the courtyard. It's probably best not to mention that this Juliet balcony wasn't added until the 20th-century!

Just below the balcony stands a bronze statue of Juliet. Legend has it that rubbing your hand over Juliet's right breast brings love and fertility.

No one quite knows when this legend started or indeed when the statue first appeared but so popular is this action that the original statue was recently moved to a museum for safekeeping and replaced by a copy. Let's hope that this doesn't dim the magic!

The house today is an attractive brick and stone building with ivy covered garden walls and a small courtyard. The entrance to the courtyard testifies to the enduring power of legend and the search for romance that we all carry in our hearts. It's covered with love letters from romantic souls searching for everlasting love.

The inside of the house is arranged as a small museum with information about the building and Shakespeare's tragedy, Romeo and Juliet. The frescoes, paintings, and ceramics are chosen to reflect the setting and story of his play while the furniture and furnishings are all genuine antiques from the 16th and 17th centuries. There is no evidence, however, that anything in the house now belonged to either the Capulets or the Cappello family

Juliet's House or the "Casa di Giulietta" is located on Via Cappello and is open on Tuesdays to Sundays from 8:30 a.m. until 7:30 p.m. and on Mondays from 1:30 p.m. to 7:30 p.m. There is a small admission charge to the house but not to the courtyard. To beat the crowds, especially in the Summer months visit this shrine to romance in the early morning or late afternoon.

Looking for an hotel in Verona?