The collection of works in the Uffizi Gallery cannot be compared to any other world collection and is probably the only one to have just masterpieces of exceptional value.

The Gallery is housed in the building built by Cosimo I of Medici and designed by Vasari in 1560. But the collection was started in 1574 when Cosimo's son, Francesco I, transformed the second floor of the Vasarian building into a place 'to walk in with paintings, sculptures and other precious things' and entrusted Buontalenti with the creation of a Tribune where art objects could be exhibited.

Vasari, who died that same year, could hardly have imagined that inside that building, born to house the Magistracy, almost all the major painters (not just Florentine) whose biographies he had written in one of the most interesting documents on the history of art, Lives, would have been on show. 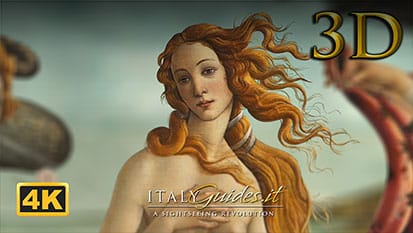 It was based on an idea of Vasari, who had put the portrait of each artist with his biography, that Leopoldo de'Medici started the rich collection of artists' self-portraits. This kept on growing over the centuries with a further 250 self-portraits arriving in the 20th century, often gifts from the artists themselves. Like Chagall who went to Florence himself to hand over his portrait.

To Leopoldo's love of collections we also owe the extraordinary miniatures collection which now has 1392 pieces and is second only to the one in the Victoria and Albert Museum in London. Without counting the vast archeological anthology along the stairs, the lobbies, in the three Corridors and organized in a particularly opulent way in the Niobe Hall. The complex also houses the important collection in the Drawings and Prints Room.

But nowadays the Uffizi are mainly a great art gallery, starting from the 13th century with Cimabue, to reach Tiepolo, Canaletto and Guardi in the last hall. Here we find the Italian painting of the Tuscan Macchiaioli or of Carrà and Severini, the foreigners Ingres and Delacroix, but also Durer, Rubens, Rembrandt and where, above all you have the unbeatable Florentine and Italian Renaissance selection, just think of the 27 Botticelli including The Birth of Venus and the Springtime or the Doni Tondo by Michelangelo, the Annunciation by Leonardo Da Vinci.

The process that led to the creation this rich heritage was not short and lasted several centuries, starting form the 17th century. The Gallery was often enriched by works collected over the years by the Medici in their villas and palaces: Ferdinando I had been given some Caravaggio as a gift, Cosimo II bought a series of Caravaggeschi, Don Lorenzo dei Medici, in his Petraia villa, mainly collected contemporary Florentine artists and many others were collectors during the 18th century managing to put together thousand of paintings: Cardinal Leopoldo, for example, owned about half the Venetian paintings on show in the Gallery today.

The exceptional aspect of the Uffizi also lies in this surprising creation process: the continuing, really extraordinary, knowledgeable and, above all, passionate collecting of kings and young princes. And in this sense the Florence Uffizi certainly represent the greatest works conceived by the Medici offspring.

In 1782, for the first time these works were organized into the Ancient Picture Room, but it was the reordering in 1919 that gave us a more organic arrangement.

In the Gallery we can see (Art Gallery):

Priority Entrance to the best collection of Renaissance art