In Autumn 1504 the Florentines witnessed an exceptional event: after four days travelling round the city, transported with the care and attention normally reserved for great events, inside a wooden cage running on greased beams, Michelangelo's David finally reached its destination, the Piazza della Signoria - and was immediately celebrated as one of the greatest masterpieces of the Renaissance. 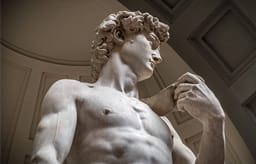 The statue was first intended to be displayed in the Cathedral, but was then felt to be of so great merit as to deserve a more important position.

Chronicles tell us of the immense surprise and marvel that the Florentines showed as it was uncovered. 'It took the voice away from statues both ancient and modern', wrote Vasari, author of a famous biography of the artist. Such a superb work had never been seen before either in Florence or elsewhere, with its manifest expression of awareness of power.

The Florentines, who called it Michelangelo's "giant", considered it the most explicit example of the spirit of the New Republic that had chased the Medici from Florence in 1494.

When he created his David, Michelangelo was not even thirty, but had already produced works of great value such as the Tondo Doni which can be found in the Uffizi today. His David was so successful that he was called back to Rome by the Pope himself, Giulio II, for whom he would then paint the famous Sistine Chapel.

The Florence where Michelangelo was born was already the city of art and trade that we know of as the driving centre of the period of cultural rebirth that we call the Renaissance. It had known artists like Giotto, Masaccio and Donatello, but it was in Michelangelo, and naturally Leonardo da Vinci, that Florence saw the incomparable genius that could best represent its cultural supremacy.

Michelangelo took three years to finish his David. This great work would confirm him as even more than just Florence's greatest sculptor.

What the Florentines saw that day in 1504, was a masterpiece with no equal. A giant almost four and a half meters high and the only large nude sculpted after ancient times, as no-one had previously dared to challenge the Greek and Roman masterpieces.

But though it does remind us of ancient models, the David sculpture is daringly anti-classical. Its position, though expressing perfect balance, alludes at movement, with its left heal raised off the ground.

The attitude is strong, arrogant and, above all, filled with inner life like no other similar classical statue. Behind the apparent equilibrium, his David represses strong energy and tension.

Michelangelo then does something of genius: he doesn't show us David after Goliath's defeat, triumphant over the giant's head, as in typical iconography, but at an unspecified moment, perhaps just after his victory. Michelangelo does not want to portray the action, but rather the possibility to carry it out and he prefers to show David's strength in power more than in the evidence of historical narration.

Strength is expressed in the exceptional vitality of his challenging look, below those frowning eyebrows and in the muscular tension shown by his meticulous design of anatomical parts. So much attention was paid to careful anatomic description that Michelangelo worked on the statue even after it had been put on show, in order to improve the plastic effects in daylight.

Michelangelo also uses an ingenious technique, giving authority to his characters through lack of proportion for some parts: the hands, knotted and extremely beautiful, the face which with the neck is bigger than half the chest.

It is in the hands and face that the virtues of universal man are to be found, in other words, physical strength and the intellectual reasoning of man. The entire work represents, in this sense, a perfect synthesis of the Florentine Renaissance.

On display in the city's most important square and in front of the seat of its government, the David by Michelangelo often risked serious damage. In 1872 they decided to move it into the Academy Gallery, into a specially designed room where it can still be seen today, while it was only in 1910 that a copy was to be placed on its original site in Piazza della Signoria.

Artist, architect, scholar, but most of all Michelangelo considered himself a sculptor: and it is in the sculptor's action of hitting marble with a chisel in an effort to draw his primary idea, the universal concept out of matter, that his incomparable genius can be found and the reason why, as Vasari said, 'his fame will live on gloriously, despite death'.

Fun fact: Michelangelo sculpted the David’s pupils in the shape of hearts!