Thousands of tourists come to Venice to see and take part in its magnificent Carnival; walking round in fancy dress in this city's magical scenery means taking part in a truly exceptional happening. Those mysterious, disturbing Venetian masks, eyeing you from the city's alleyways are part of what we imagine the Venetian world would have been like 300 years ago. They are an irresistible attraction for what is undoubtedly one of the world's most unique experiences: the re-living of 18th century Venice. 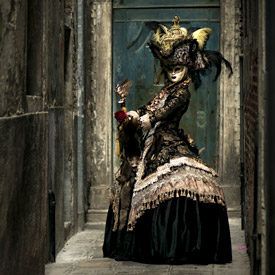 Wearing masks has always been more than just simple fun for the Venetians; it is still a strongly felt tradition with deep cultural roots.

Venetians were famous for being libertines and for transgression - they didn't just use masks during the official Carnival. Putting on a mask in Venice meant taking forbidden liberties: you could jibe at the powerful, gamble without being caught, take risks over love or business deals and even enter convents without being seen. A numbers of restrictive laws passed on dressing up prove how widespread the habit was.

In 1608, the Council of the Ten issued a decree, forbidding any citizen to wear masks except during the Carnival and official banquets. Masks were permitted during all important events, banquets and the main Serenissima celebrations such as Ascension day, or when the Doge climbed on the Bucintoro, or, for the flight of the Colombine when a wooden bird would shower flowers on the crowd. Impoverished nobles used masks to beg in the street and married women were forced to wear them when they went to the theatre.

The Carnival itself, meant letting-go and abandoning oneself to play; freedom, transgression and good-willed madness. Palaces opened their courtyards to celebrations and there was music and dancing all day and all night in the alleyways, small squares and even on the water. Venice was alive with sound and colour.

The most widely used mask, for which Venetians would spend absolute fortunes, was the 'bauta': it was an ample full-cut black mantle which dropped over the shoulders down to the waist. On their heads they wore the typical black, three-cornered hat (the tricorno), and on their faces a white mask called 'larva', with a widened, protruding lip that altered their voices. The bauta was used by both men and women who wore it in black in winter and white in summer.

There was also a series of masks for different special occasions: one of these was the 'moretta': a black velvet oval, normally worn by women, especially when they visited convents. This was a "mute" mask: it was placed over the face and had a small button that went into the mouth to prevent speech.

The craftsmen who made masks were called 'mascareri' and had the status of painters. They were assisted by the 'targheri', who painted faces of all different kinds on the plastered surface.

Even today, while walking round Venice you come across craft shops renewing this ancient tradition.

Reaching its maximum splendour in the 18th century, the Carnival returned to new life in the 1980s and nowadays lasts a month with shows, balls, music and plays organized all over the city. The event attracts up to a million visitors a year, all competing to show off their magnificent and often very expensive costumes.

Amidst the Carnival's fairy atmosphere, Venice goes back to becoming a magic 18th century city where, as if dreaming, you could meet Giacomo Casanova, take a gondola with Carlo Goldoni, or surprise a noblewomen meeting her lover.

And Venice could even reserve us yet another honour: we could see the Doge in person walking along just a few steps away from us...

More infos about the Venice Carnival available on the official website.

The next Venice Carnival is scheduled to happen:

Free audio guides of Venice for mp3 players to download

Looking for an hotel in Venice?