New Moon is the second novel of the Twilight saga by Stephenie Meyer, a brooding and mysterious tale that tells of the strong love between the handsome vampire, Edward Cullen and his human girlfriend, Bella Swan. A new moon is the darkest phase of the lunar cycle, making it the perfect title for Meyer's descriptive prose about the darkest and lowest period in Edward and Bella's lives. 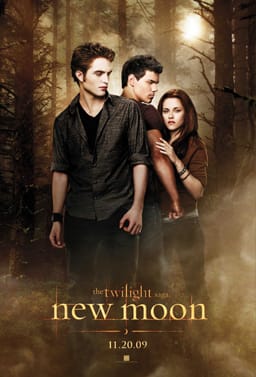 A series of plot twists and unexpected events lead Edward to believe that Bella has taken her own life by jumping off a cliff. In sadness and despair, he heads to Volterra in Italy.

Vampire royalty, the Volturi reside here and Edward seeks their permission to end his own life. The importance of his special powers makes it impossible for them to give permission so Edward plans on revealing himself to humans, thus giving the Volturi no other alternative than to kill him.

Bella arrives just in time to be reunited with Edward and save his life and they leave Italy together, leaving the way open for the next book in the saga.

Finding a Tuscan town for the New Moon.

One of our first glimpses of honey-colored Volterra in New Moon is the citizens celebrating Saint Marcus Day, the day when the saint drove the vampires from the town. Little did they know this was a misconception and the red-eyed Volturi remain alive and well.

Meyer wanted a Tuscan city to provide a home for the mysterious lives the Volturi live alongside their non-vampire neighbors and this ancient town makes a real and perfect setting.

The scenes that are set here had already been written before Meyer chose her location's name so her search was on for a setting approximately two hour's drive from Florence Airport. It needed a piazza, a clock tower, and a crenelated turret. Volterra fits the bill exactly.

The only thing missing is the fountain in the square that Bella runs through to get to Edward. Apparently the good citizens are more than happy with their town being used, although they think their square is perfect without a fountain and have no plans to add one!

If you're a fan of New Moon and the Twilight saga you have no better reason for visiting the beautiful Italian towns and countryside of Tuscany.

Follow Edward and Bella's steps as they move through the book's scenes and imagine the action as you admire the architecture of the crenelated clock tower in the Piazza del Priori. Just add in elements of the darkening clouds of twilight gloom to transport yourself into the mysterious hidden life of the Volturi.

But make sure you're in the right place!

Don't get too carried away and try and find the movie's backdrop in the wrong place!

The setting for the Volturi's home is transported to the remote town of Montepulcino. The square in New Moon is the Piazza Grande while the Palazzo del Comune becomes the clock tower.

The fountain is still missing, a problem easily solved by the wizardry of the film crew. Climb to the top of the Palazzo del Comune and with a little imagination you might just see a hint of Volterran vampires in the distance.

Plan your trip thanks to our interactive maps