The leaning tower of Pisa, Italy

The Leaning Tower of Pisa, within the confines of that incredible medieval enclosure known as Pisa's Field of Miracles or Campo dei Miracoli, is not only one of the most famous of monuments but also one of the most original in the world, absolutely unique in its kind. Its exceptional nature isn't due only to its peculiar inclination because, even if it didn't lean, the Tower of Pisa would still be one of the most remarkable belltowers in Europe.

Its particular alignment was certainly not part of the original plan, even though, in the past, it was believed to have been. The Tower of Pisa was, in fact, intended to be straight but began to lean even as it was being built; this was due to the continual subsidence or weakening of the ground beneath it, a subject of study and intervention to this day. The ground on which Pisa is built is a flood plain and can't withstand excessive weight. In fact, the leaning tower isn't the only thing that leans in Pisa, there are plenty of buildings all over the city that lean in every direction — palaces, churches, even simple houses. 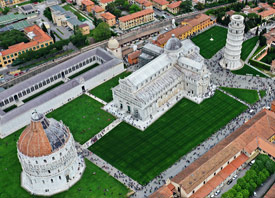 The leaning tower of Pisa is the belltower of the Duomo but its position is singular: in fact, it isn't placed next to the Duomo's facade as would be usual but is instead set apart from it. At any rate, it's not by chance that it's placed in the most visible point of the piazza, at the intersection of two of the most ancient streets of the city: Via Santa Maria and Via Emilia that proceeds towards the Duomo.

The construction of this imposing mass was started in the year 1174 by Bonanno Pisano. When the tower of Pisa had reached its third storey the works ceased because it had started sinking into the ground. The tower remained thus for 90 years. It was completed by Giovanni di Simone, Tommano Simone (son of Andreo Pisano), crowned the tower with the belfry at half of 14th century.

The top of the leaning tower of Pisa can be reached by mounting the 294 steps which rise in the form of a spiral on the inner side of the tower walls.

This very famous work is of Romanesque style, and as already stated dates back to the year 1174. Cylindrical in shape it is supplied whit six open galleries. A cornice separates these galleries one from the other and each presents a series of small arches fitted on the capitals of the slender columns. In the base there is a series of big blind arcades with geometrical decorations. In the belfry there is the same design of arcades as that of the base, with the difference that here, there are, apart from the reduced proportions, the housings of the bells. Although stately, this monument is not lacking in elegance and lightness due to the arcades and open galleries between one storey and another. 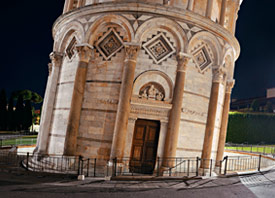 The Tower's weight is indeed notable: it's an empty cylinder tipping the scales at 14,500 tons, and its width varies. Its base is a good four meters in width then thins out towards the top where it's about half that. The “lean” of the Tower, so characteristic of this building, can easily be measured by the overhang of the horizontal cornices that crown each floor: the highest sticks out 4 meters over the lowest, an inclination of more that 5 degrees.

The Tower rises 56 meters high and is visible not only from anywhere in the piazza but even from the River Arno. It was a sort of lighthouse, a reference point between the city and the piazza. It was also, naturally, a symbol of the moral and civil virtues of the entire community.

There are seven bells at the top of the tower, a complete musical scale; the oldest bell, called "Pasquareccia", was the one used to announce the death of Count Ugolino della Gherardesca, accused of treason and closed up in another tower and left to die of starvation along with his children and grandchildren.

A legend tied to the Tower of Pisa concerns the astronomer Galileo who, to demonstrate his law regarding falling weights, climbed to the top and is supposed to have dropped objects of differing materials to verify the truth of his theories.

Unfortunately, even today the great mass continues to sink very slowly. It is a question of about 1 mm. every year. Since nobody can state with mathematical security that this sinking will continue in the future at the present yearly rate, without its ceasing, remedies by means of adequate measures, based on scientific studies and projects, are under consideration. In the meantime supervision with instruments of very high precision is continuously being carried out.

The official website of the leaning tower is: https://www.opapisa.it

Pictures of the leaning tower of Pisa 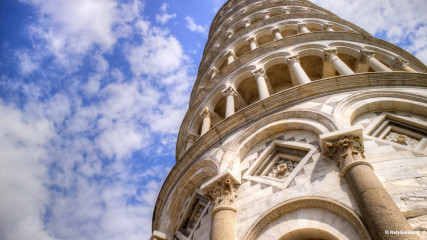 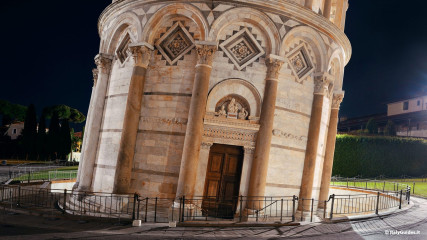 Entrance door of the tower 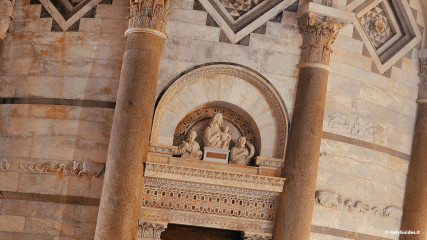 Detail of the entrance door of the tower

Spiral steps inside the tower

The seven bells at the pinnacle of the tower

The oldest bell known as “Pasquareccia” 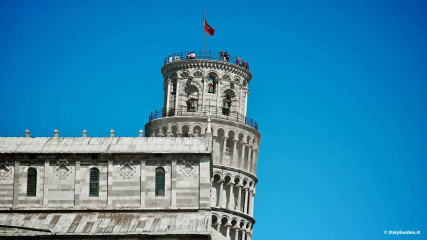 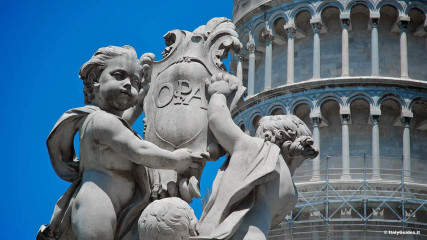 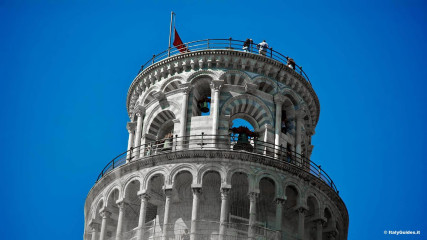 The leaning tower of Pisa
Located in: Pisa, Italy

Free audio guides of Pisa for mp3 players to download

Looking for an hotel in Pisa?